Serkis is best known for his performance capture roles comprising motion capture acting, animation and voice work for such computer-generated characters as: Gollum in The Lord of the Rings film trilogy (2001–2003) and The Hobbit: An Unexpected Journey (2012), King Kong in the eponymous 2005 film, Caesar in Rise and Dawn of the Planet of the Apes (2011, 2014) and Captain Haddock in Steven Spielberg's The Adventures of Tintin (2011). Serkis' film work in motion capture has been critically acclaimed, earning him recognition from many associations that do not traditionally recognise motion capture as "real acting". Serkis has received an Empire Award, a National Board of Review Award, two Saturn Awards and a Screen Actors Guild Award for his motion capture work.

Serkis also earned a Golden Globe Award nomination for his portrayal of serial killer Ian Brady in the British television film Longford (2006); and he was nominated for a BAFTA Award for his portrayal of new wave and punk rock musician Ian Dury in the biopic Sex & Drugs & Rock & Roll (2010). 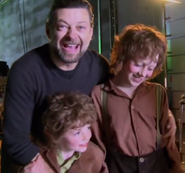 Serkis with his sons Louis and Sonny on set of the Old Took's 104th birthday party.

Serkis filming on set in Hobbiton.

Serkis talking to Luke Evans as Girion before filming.
Add a photo to this gallery
Retrieved from "https://peter-jacksons-the-hobbit.fandom.com/wiki/Andy_Serkis?oldid=9375"
Community content is available under CC-BY-SA unless otherwise noted.